The city of San Dimas will implement a new permit parking program after a unanimous vote by the city council during the Feb. 23 council meeting.

Parking permits are considered a last resort option and can be considered for an affected neighborhood through petition, according to the resolution passed by the city council. 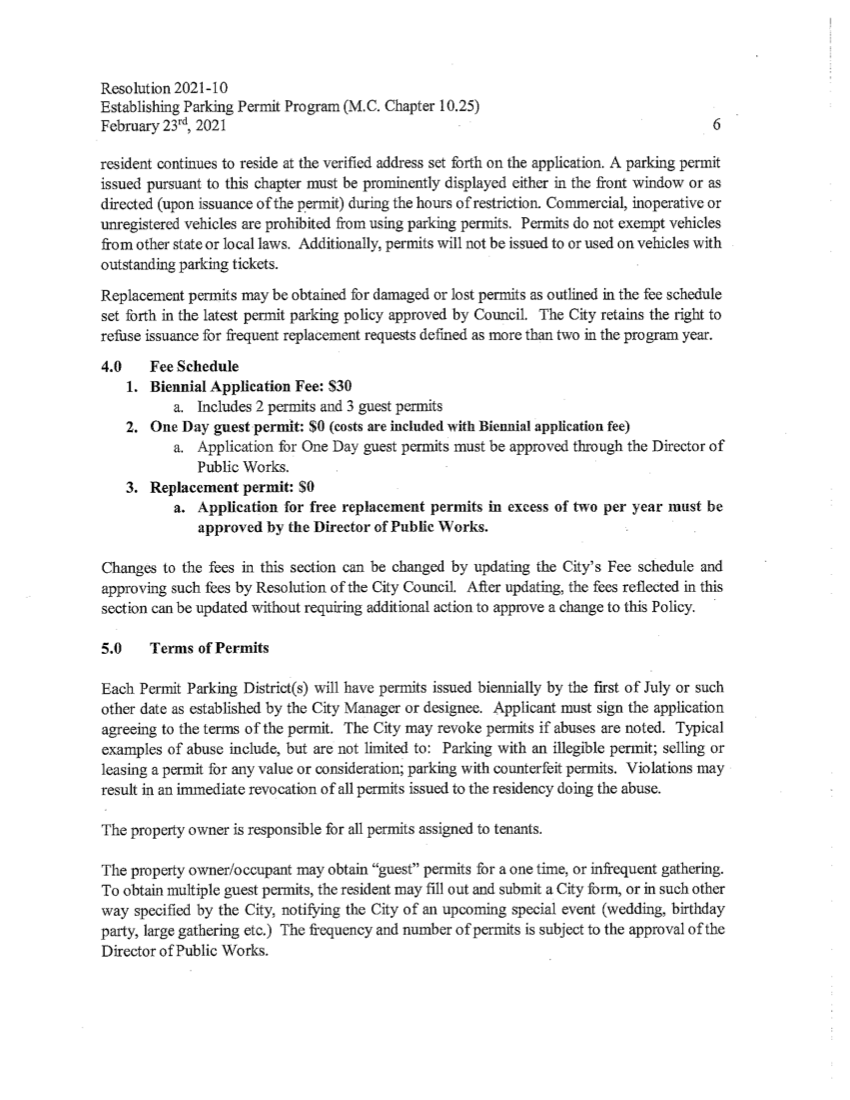 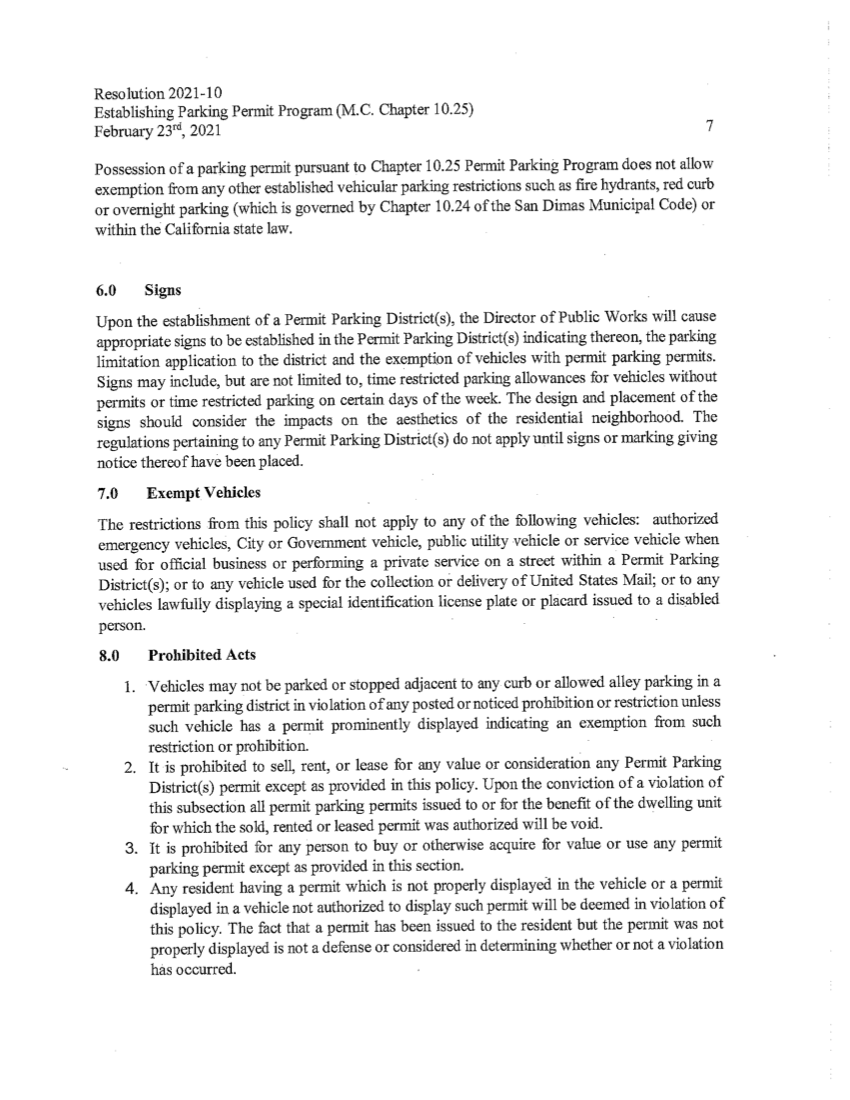 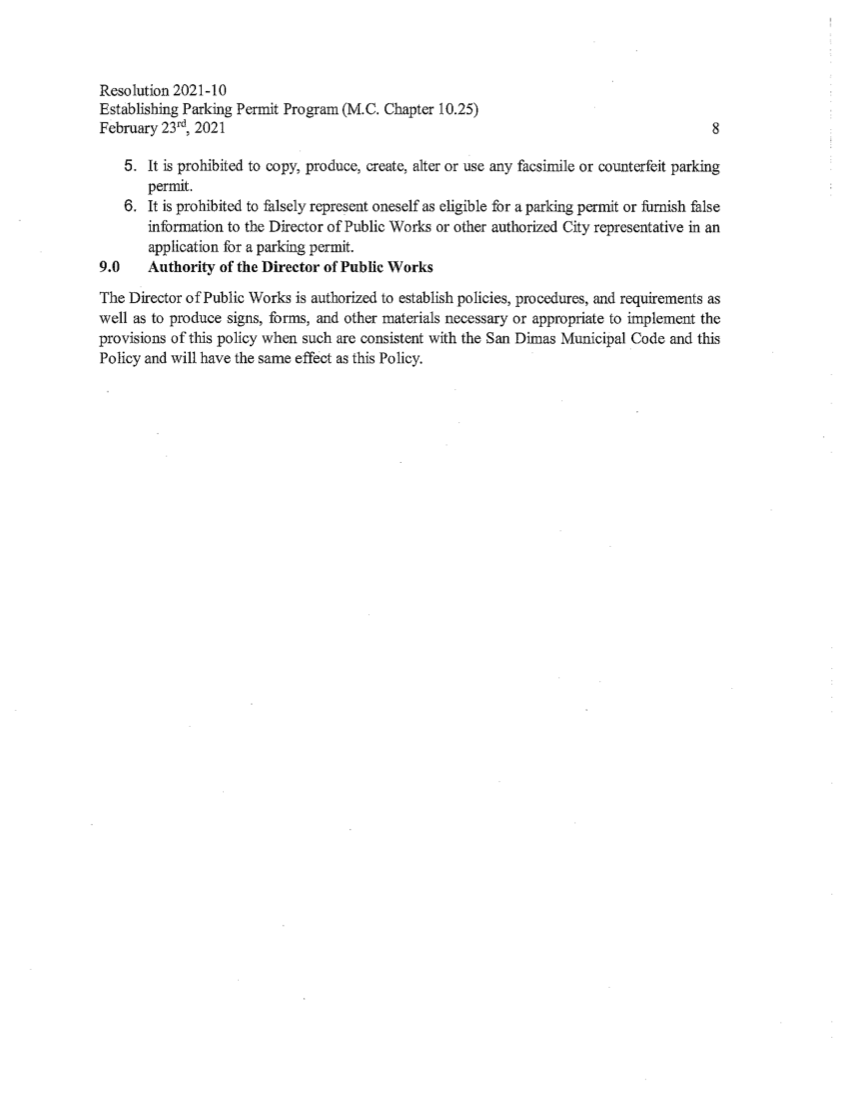 The director of public works may also submit a proposal for a permit parking district, and the council may establish permit parking without a petition at their discretion.

In order for permits to be implemented via petition, 67% of property owners in the affected neighborhood must be in favor of the change.

To garner approval or disapproval of the residents, a petition would have to be circulated around the affected area, and only signatures belonging to property owners listed on County Assessor records will be counted.

“These affected areas, if they’re affected as much as I think they are, I don’t really think you’re going to have a problem getting buy-in from two-thirds of the people affected,” Councilmember John Ebiner said during the city council’s study session over the matter.

Should a neighborhood receive the 67% of signatures required, the city would verify signatures then evaluate the parking issues with the Traffic Safety Committee. The committee would either deny the neighborhood request or recommend approval to city council.

If the parking permit policy is implemented  in an affected area, residents may choose to pay an application fee of $30 that includes two permits and three guest permits for two years. Additional one-day guest permits and replacement permits would be available at no extra cost to residents, subject to approval by the director of public works.

Neighborhoods near San Dimas High School, such as Danecroft, have faced parking issues as far back as 2001, according to Director of Public Works Shari Garwick.

San Dimas resident Dan Daniel shared a similar sentiment, stating that parking issues near the school have continued on and off for the last 15 years or so. However, he believes the city is very close to a solution with the permit parking program.

Daniel has been living in the city for 27 years and said there had never been parking issues until the school started charging students for parking permits. Although there were only a few additional cars on his street in the beginning, over the years the number has only grown, Daniel said.

Students avoid parking fees by parking on the street, and traffic congestion builds up at the beginning and end of the school day due to students being picked up and dropped off, Daniel added. He also said that kids will be kids, which sometimes can mean smoking or racing their cars through the neighborhood.

Daniel said he will more than likely be the one to go around with the petition for signatures from those within his neighborhood to try and get the permit program implemented.

“I’m looking forward to being able to go around and talk to my neighbors,” Daniel said. “Hopefully getting them involved and explaining to them what’s going on. The advantage is being able to talk and explain to them that if they don’t need the permit they don’t have to buy it.”

Robert and Kay Piotrowski are the original owners of their house in the Via Verde area, where they have been living since July 1979. They live by the popular Antonovich Trail, which has caused parking issues throughout the neighborhood, especially after reopening last May.

“They were parking here to go down to the trail, and on Memorial Day we had 75 cars parked on our streets up here,” Robert said.

In addition to overcrowded parking on public streets, people who come for the trail have been found trespassing on neighbors’ lawns for picnics and leaving trash behind in the process, Robert added.

His wife, Kay, believes a big issue is that many people are unaware of both the Valley Center and Lyman Staging Areas that serve as trail parking lots. For a while, information regarding parking could not even be found on the county website, she said.

However, Robert claimed that parking for the trail is too inconvenient because it is nearly four miles away while their neighborhood is in closer proximity to the trailhead.

Temporary solutions were made to alleviate the parking issues, such as street signs prohibiting trail parking. However, those signs cannot be enforced, the couple said.

Although the couple agree that parking permits are the only real solution that remains, they do not think it is fair they have to pay for it.

“It doesn’t seem fair that we should have to pay for something when we didn’t move here to live in a parking lot,” Kay said. “I don’t love permits, but I also don’t know what else the city could do to help with the problem.”

The couple may question the fairness of having to pay for the permits, but they still seem to understand that the policy is needed.

“If we don’t get the permits, we’re in trouble,” Robert said. “We have to get something up here whether we have to pay for it or it’s free. We need something more than these signs.”

Disclaimer: Isabel Ebiner is the managing editor for the San Dimas Community Post and daughter-in-law of Councilmember John Ebiner. Isabel was involved with copy editing this story.

DONATE TODAY SUBSCRIBE WRITE A LETTER TO THE EDITOR

BUSD Board of Education Votes to Comply with COVID-19 Rules

In a 3-2 vote, San Dimas City Council adopted a new policy banning relatives of the

A press release from City Manager Chris Constantin explains, “the suspect involved in this senseless act

Parks and Rec Director Seeks $900,000 from City of San Dimas

Hector Kistemann, director of the Parks and Recreation Department, has filed a claim against the city