The Foothill Gold Line is Coming to San Dimas

The Foothill Gold Line is scheduled to make its way through San Dimas by 2025, creating a new San Dimas Gold Line Station.

The San Dimas Gold Line Station will provide residents with access to the LA Metro ‘L’ Line, a growing light rail network across Los Angeles County. The station will be located on San Dimas Avenue near Commercial Street (behind the CVS plaza). Once completed, the transit line will allow individuals from San Dimas to travel to Pasadena in approximately 27 minutes and Downtown Los Angeles in roughly 56 minutes.

San Dimas is one of four cities in the San Gabriel Valley where fully-funded stations are currently in development. The four stations along the 9.1-mile extension will be located in Glendora, San Dimas, La Verne, and Pomona.

Previously-planned stations in Claremont and Montclair, however, do not have full funding to be completed at this time. Lisa Levy Buch, a spokesperson for the Foothill Gold Line Construction Authority, which is overseeing the project, said that there is less money available due to the pandemic.

“Right now, it’s not looking real good for that because of COVID right now. Money has been very tight, as you can imagine,” Buch said. The Foothill Gold Line project needs to come up with $450 million by October of 2021 to fund the Claremont and Montclair stations, which would push the entire project back to 2028.

“So from Glendora to Pomona, we anticipate it will be finished in 2025,” Buch said. 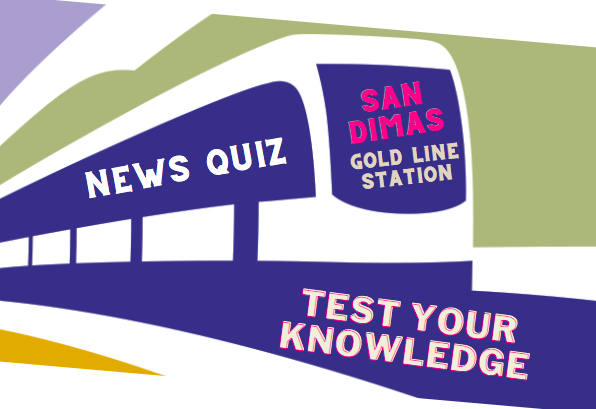 Do you know where the Foothill Gold Line’s San Dimas station will be located? How many cities does the current expansion include? How long will a trip from San Dimas to Downtown LA take on the Gold Line? You’ll find the answers to these questions and more in our Foothill Gold Line quiz.

We wanted to know what was on the minds of San Dimas residents when it came to the Gold Line. Were people excited about the station coming to town? What were their concerns? Below is a breakdown of the responses from SDCP readers on our social media during the week of Mar. 15. (Click on an image for a larger version.)

San Dimas residents have many questions about the Gold Line station. What does mass transit mean for the San Dimas community, and how will it affect you?

With the commencement of major construction in mid-July, it seems that after years of anticipation and no shortage of hurdles, the Foothill Gold Line is at last making its way to San Dimas.